An unforgettable catski trip at Island Lake with gorgeous runs, top-notch food, après-ski in the woods and Christa’s protector striptease.

The seven pinnacles of the Lizard Range sparkle like sugar loafs in the evening sun. In front of them, an immaculate blanket of snow glistens on the mountain lake with its small island. A bald eagle circles majestically above Bear Lodge. This is one of the three imposing log cabins at Island Lake Lodge, located in the middle of the Kootenay Rockies. 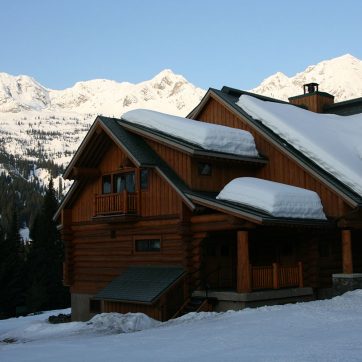 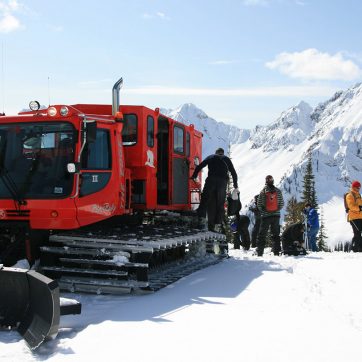 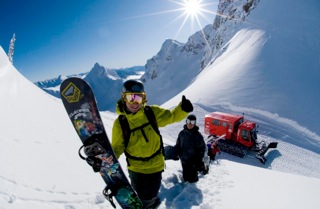 Fernie as starting point for catskiing at Island Lake

Around the lodge there is heavenly silence in the late afternoon. And yet the ski area is just ten kilometers away from Fernie as the crow flies. There, skiers and snowboarders now climb into their huge pickup trucks, which are then swallowed up by the avalanche of cars that rolls down the valley to Fernie every afternoon.

At Island Lake, no car disturbs the almost unreal scenery. The cars remain in the valley, a snowcat brings the guests in scarcely half an hour over snow-covered forest ways to the lodge situated 1400 meters high.

No sooner have we moved into one of the wooden cabins than we trudge over to Tamarack Lodge. Our view sweeps over the Lizard massif. The Island Lake area is three times larger than the Fernie ski area. However, while up to 13,000 guests per hour are transported up the mountains there, here it is just 36 per day!

Before we are finally allowed to make our first turns tomorrow morning, guide Corry calls for paperwork. In the event of an accident, we must waive all claims against the organizer in writing. That’s where the skull and crossbones literally shimmer through the paper, jokes one of the participants about the forms common in North America.

Safety is top priority for any catski company.

But no one is worried. As casual as the Canadians are in other respects, they are uncompromising when it comes to safety. Conscientiously, Corry explains to his group of twelve the correct behavior on the mountain and what to do in the event of an avalanche accident. Some regulars are hearing this for the umpteenth time, but the guide is adamant. Safety is the number one priority, says Corry, who prides himself on the excellent training of Canadian catski and heliski guides.

Even the next morning, Corry and his colleagues are meticulous about making sure everyone knows how to use an avalanche transceiver, probe and shovel and practices extensively. In the event of an emergency, quick help from comrades can save lives or – even better – an avalanche backpack from ABS. Whoever releases the airbag floats on the avalanche, is usually not buried and thus has much higher chances of survival.

Protectors are part of the package

Avalanche airbags, helmets and back protectors used to be laughed at, but today they are considered cool and even sexy, reports Christa. This is the fifth time she’s been here, the New Yorker tells us. And since Komperdell makes a model with lace, even with a back protector. Before the visibly interested gentlemen in the group can enjoy Christa’s protector striptease, Corry calls for us to leave. 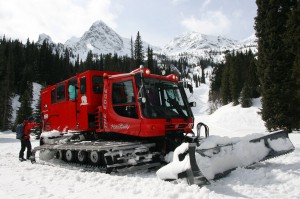 Our snowcat is ready in front of the lodge. We climb over the chain into the heated cabin and off we go. Corry sits in the driver’s cabin and checks the avalanche situation again by radio. Two guides have driven up with snowmobiles and are checking every slope we want to head for today.

Meanwhile, back in the passenger cabin, excitement is building among the novice skiers and anticipation among the veterans. Greg from Seattle has plugged his iPod into the stereo – it’s just too bad that the man is a heavy metal fan. Half deaf, we climb out of the cabin at the first stop. The silence is restful, the panorama overwhelming, and the immaculate bowl euphoric. Nonchalantly, Corry draws a first track in the powder slope. Then we are allowed. Finally! One after the other we start wagging. The second guide of the group follows last.

Snowboaders Heaven is nice and wide and not too steep – ideal for warming up, says Corry. After three more runs from the highest exits at around 2200 meters, we head over to Left Hook. The Left Hook is a gorgeous forest descent – steep at the top, then gently sloping out over clearings with single trees. We do a little clearing here in the summer so we can do natural slalom in the winter and not get caught in the thickets, explains Corry’s wife, Brenda. She, too, is a trained guide and she loves these gladed terrains that are hard to find in the Alps.The longest descent, Hot Tub Shoots over 1,100 vertical meters, we save today and stay on standard runs with an average of 450 vertical meters. With eight to twelve runs, you get an average of about 5,000 vertical meters per day. Even for normal skiers and snowboarders this is easily manageable, especially since the comfortable ascents in the warm snowcat leave enough time to relax. The wide skis provided and the dry powder snow in Canada also make the deep snow adventure easier. Here you ski therefore always a class better than at home, raves Julia from Stuttgart. 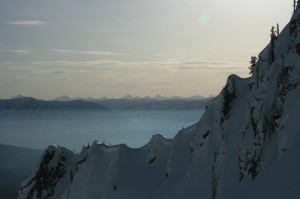 After-work beer in the forest

After the last descent of the day, the reward awaits in the middle of the forest. One of the guides has brought a first beer for everyone on a snowmobile. Afterwards it goes with the snowcat back into the Lodge, where already the fire in the enormous fire-place burns. However, one should not sink here. Before dinner at gourmet level, a trip to the hot tub is a must. Each lodge has its own hot tub on the terrace with a view of the Lizard Range – the backdrop to our terrific catskiing adventure at Island Lake.

Tips from the Steep & Deep Coach in Fernie

Fancy a catskiing trip to Island Lake, but don’t feel prepared enough for the off-piste adventure? No problem. The Ski School at Fernie Ski Resort has special „Steep & Deep Coaches“ who can get any good skier or snowboarder ready for catskiing or heliskiing in just a few hours.